Ragdoll Runners will be available soon on iOS and Android. For free!
Sign up for the newsletter to be notified when you can download it.

Here is the web demo where you can also buy the game.
And the Steam page if you prefer to buy it from Steam. 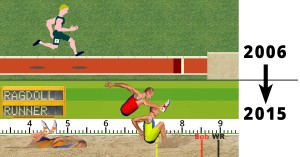 I started developing Ragdoll Runners in 2005 on GameMaker 6 and published a prototype on my french blog in 2006. At that time, the gameplay was more difficult than now (there were two more keys to control the leaning of the athlete) and graphics were… how to say … childish?

Players who tested it at the time found it promising but too hard and, because of my studies and work, I stopped its development.

7 years later, hearing my colleagues speak about QWOP, I remembered: “I also made a game like that long ago [and released a prototype 2 years before the release of QWOP, for those who claim I copied QWOP], I’ll try to find a version on my old hard drive “… File not found.

I finally found it in an email (at that time I was doing my backups on gmail. I can assure you, things have changed since). So I found an old version of GameMaker (version 6) to launch the game and shown it to my colleagues. They found the game fun and convinced me to finish it.

I decided to continue the development on the new version of GameMaker (GameMaker: Studio), especially because it allows the creation of multiplatform games (I plan to make an Android version and maybe an HTML5 demo). But the physics engine I was using (ODE) was in the form of a DLL, which is Windows only. So I had to rewrite the physics of the game for the multiplatform physics engine used by GameMaker Studio: Box2D.
Because there were differences between Box2D and ODE, at first, my gameplay went completely wrong: everything was much too rigid. It took a lot of trial and error to finally find a trick to provide flexibility to the joints. I took the opportunity to improve the gameplay (especially to lower the difficulty) and the realism of animations with the help of my friends who have tested the game regularly (thanks a lot guys!).

Then I focused on sound, graphics and sand effects. Being neither sound designer or graphics designer, it was not easy. Fortunately, there are websites where you can buy sound and graphics assets!

My current goal is the integration of leaderboards and the possibility to play against online replays of friends’ and other players’ records. Then the game will be ready for release. See you early 2016!